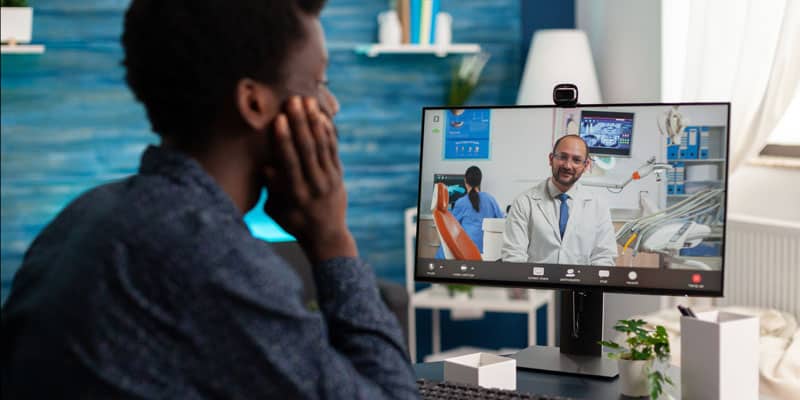 The purpose of the present study was to assess pulp and root canal diagnoses and treatment plan formulations performed by endodontic specialists (ES) and general practitioners (GP) in the clinic and by teledentistry.

The study included 187 patients who required endodontic specialist (ES) consultation. The study consisted of three phases: General practitioners (GP) in the clinic (GPIC), ES by teledentistry (EST), and ES in the clinic (ESIC). In each phase, pulp and periapical diagnoses and treatment plans were determined. The results were summarized, and differences among the three examination methods were evaluated. Data was analyzed in SPSS-24 using the Chi-square test. The p-value was set at 0.05.

Continuing education for GPs will lead to better and more successful teledentistry, as it could reduce the number of referrals to specialists, reduce the waiting time for appointments, and minimalize the in-person interaction between patients and dentists/dental clinic staff, which is crucial during this COVID-19 pandemic.

As life expectancy increases and with advances in medical system technology and procedures, burdens on the healthcare system increase as well. Telemedicine is a broad term comprising a number of technologies, from digital X-rays to over-the-phone consultations, videoconferencing, and remote surgery.1 In other words, telemedicine is simply the use of telecommunications technology to deliver medical care or services, thereby making medical care more accessible, convenient, and affordable. Telemedicine makes it easier for patients and individuals to access medical care. Rather than spending many hours or days traveling to a healthcare center, medical advice and consultation can be obtained more locally, freeing up time and increasing the ease of receiving care.2

Teledentistry is a term that combines the terms telecommunications and dentistry. It involves the delivery of clinical data and images through different technologies for dental consultation and treatment plan formulation at a distance.3 The term “teledentistry” was first used in 1997, when Cook defined it as “… the practice of using videoconferencing technologies to diagnose and provide advice about treatment over a distance.”4

In 1994, telemedicine was first used as a subspecialist field in a military project of the United States Army (U.S. Army’s Total Dental Access Project), aiming to improve patient care and dental education and to effectuate communication among dentists, dental laboratories, and dental specialists. Teleconsultation through teledentistry can take place by either “real-time consultation” or the “store-and-forward method.”5 Real-time consultation involves a videoconference in which dental specialists and their patients communicate with one another from different locations. The store-and-forward method involves the exchange of clinical information, static images, and radiographical data collected and stored by dental general practitioners, who forward them to dental specialists, who determine consultation and treatment plans.3,6

The purpose of the present study was to compare pulp and periapical diagnosis and treatment plan formulation by endodontists and general practitioners performed in the clinic and by teledentistry and to evaluate the efficacy and accuracy of teledentistry.

The study was approved by the Ethics Committee on October 18, 2018 (number of approval–5269). The study included teeth from 187 patients from military bases (average age of 19 years old) who required endodontic specialist (ES) consultation.

The study included three phases of examination for each patient:

First phase — examination by a GP in the clinic (GPIC): The GPIC phase included pulp and periapical diagnosis and treatment plan formulation performed by a GP via clinical and radiographical examination in the clinic according to a structured questionnaire (Figure 1).

Second phase — teledentistry “store-and-forward method” by an ES (EST): The EST phase included pulp and periapical diagnosis and treatment plan formulation performed by an ES using the periapical radiograph and questionnaire findings from the first phase, which were sent electronically from a GP.

Third phase — examination by an ES in clinic (ESIC): The ESIC phase involved pulp and periapical diagnosis and treatment plan formulation performed by an ES via clinical and radiographic examination in the clinic. The third phase was performed 2 weeks or more after the second phase by the same endodontist.

A total of four general practitioners with 3-4 years’ experience and two endodontic specialists with 5 years’ experience participated in the study. The diagnoses and treatment plans in each phase were summarized, and disagreements among the three examination phases were evaluated.

Data was analyzed using SPSS-24 (IBM SPSS Inc., Chicago, Illinois). In order to examine the existence of variance between the groups, a chi-square tests were used. The p-value was set at 0.05.

We expected agreement between the ESIC and EST groups in both pulpal and periapical diagnoses and suggested the highest rate of differences in diagnoses will be found in comparing ESIC and GPIC groups due to variations in examination technique and lack of clinical experience. ES by teledentistry compared to ES in the clinic

The difference between the methods was significant (p < 0.05).

The use of teledentistry for specialist consultations, diagnoses, and treatment planning will enable more affordable and convenient decision-making. The COVID-19 pandemic created challenges in dentistry across the globe.7 Examination and dental treatment involve interaction with the patient, consisting of inspection, diagnosis, and intervention. As a result, during the current pandemic, most routine dental procedures worldwide were suspended, and only emergency dental procedures and surgeries were being performed.7,8 In situations such as this, teledentistry can provide an innovative solution to continue dental practice during the current pandemic and beyond.9 In this research, the validity of diagnoses and treatment plans by ESIC, EST, and GPIC was compared, and complete agreement on pulp diagnoses was found among the three methods. However, partial agreement on periapical diagnoses and treatment plans was found between GPIC and ESIC and between ESIC and EST.

Different diagnostic evaluations and treatment plans between GPs and ESs were previously studied in different dentistry fields: Tamse, et al., 2011 reported that only 33.8% of vertical root fractures were diagnosed by GPs;10 Shemesh, et al., 2018, found that 37% of external invasive root resorptions were not diagnosed by GPs;11 Al-Haj Ali, et al., 2020, demonstrated insufficient knowledge on the emergency management of complicated crown fractures of immature permanent teeth,12 and Alkhalifah, et al., 2017, revealed large differences in treatment planning approaches for cracked teeth between GPs and specialists.13 In our study, the disagreement percentages, which are similar to those of the preceding studies, indicate the inaccuracy of clinical and radiographic evaluations by GPs.

Continuing endodontic education for general practitioners for accurate estimation of symptoms and clinical findings will lead to better and more successful teledentistry and could reduce the number of referrals to specialists, reduce the waiting time for appointments, and minimalize the in-person interaction between patients and dentists/dental clinic staff, which is crucial during this COVID-19 pandemic.

This research received no specific grant from any funding agency in the public, commercial, or not-for-profit sectors.

If you are already utilizing teledentistry, remember to maximize your marketing regarding your patients’ increased options. Read “Telemedicine marketing checklist: 10 things endodontists should do” by Rachael Sauceman here: https://endopracticeus.com/telemedicine-marketing-checklist-10-things-endodontists-should-do/

Avi Shemesh, DMD, was born and raised in Israel. In 2005, he received his dental degree from Tel Aviv University, The Maurice and Gabriela Goldschleger School of Dental Medicine. After graduating from dental school, he practiced general dentistry in the Medical Corps, Israel Defense Forces. In 2011, he started his Endodontic Residency in the Department of Endodontics in the residency center of the Medical Corps in the Sheba Tel-Hashomer Hospital. From 2015 to 2021, Dr. Shemesh served in different specialist duties in the Medical Corps. Now Dr. Shemesh’s rank is lieutenant colonel, and he is the Chief Dental Surgeon in the Medical Corps, Israel Defense Forces. He also is in the “Bina” Program, Faculty of Dental Medicine, Hebrew University of Jerusalem, Jerusalem, Israel.